The Collection of Richard & Joane Smith 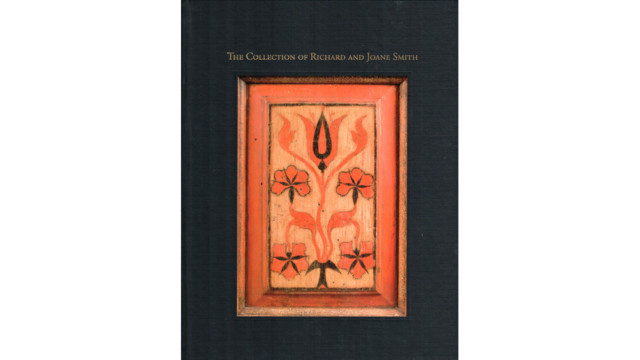 The Collection of Richard & Joane Smith

Richard Flanders Smith and his wife Joane both grew up in New England, Richard in Massachusetts and Joane in Connecticut.  They both had a keen interest in art and design and attended the Yale University School of Fine Arts where they met as 3rd year art students.  The couple sent each other one handmade drawn or painted card after card as their romance blossomed. After eloping in 1948, they moved to follow Rich’s design career, first to Providence, Rhode Island, to St. Louis, Missouri, to Ames, Iowa and finally to Pennsylvania.

The couple and their growing family moved from a basement apartment, to an A-frame home, to a modest single family home, to a brick 1850 farmhouse. Joane was a wonderful full-time mother to three sons and one daughter.  Richard went from being a teacher, to grading mail-in drawings, to being an art director of a public television station, to being a designer, then Vice President of Product Styling and Design at Armstrong World Industries. Their initial taste in decorations and furniture were modern, with angular 1950’s shapes, Eames chairs, and glass and marble tabletops.

After moving into the early Mennonite farmhouse in Lancaster, they began to collect local antiques and folk art to furnish the home.  They focused on Pennsylvania-German primitive antiques.  Weekends would start with scouring the paper for the Saturday and Sunday auction listings, mostly household good sales. Saturday mornings would start early, in order to get to the ‘finds’ before other collectors. They looked for hand painted early bookplates in hundreds of boxes of books, the occasional  fraktur glued to the underneath of a blanket chest lid, rat-tail hinges in random boxes of hardware, splint and rye baskets, early clay figures and wood carvings. They would pour over the furniture; often finding a piece they knew Richard could strip down to its original blue, green or red paint. Joane would go after the baskets, quilts, carvings, hooked rugs and prints.  Sometimes they would split up to cover another sale, but usually they stayed together, often with Richard bidding and Joane telling him he paid too much. They amassed an amazing collection over the years – corner cupboards, blanket chests, schranks, Dutch cupboards, farm tables, fraktur, stoneware, redware, wood carvings, etc.  Joane became known as the “Basket Lady” for her large collection of rye straw baskets.

Joane and Rich made many wonderful friends in the antique world – Vernon and Jackie Gunnion, Don and Trish Herr, Jim and Betsey Nyeste and Eugene and Vera Charles, to name a few.  They started dealing in Pennsylvania German folk art and Fieldstead Farm Antiques soon was a regular fixture at Shupp’s Grove and Renninger’s Flea Markets in Adamstown, PA on weekends. The 5AM start allowed ample time to setup a booth or table, which almost always included scouring the other dealers’ inventories to fill in a blank prior to opening. The Lititz and York Antiques shows were a must. Richard and Joane’s flair for art showed in their well-designed booths. Their passion for antiques also eventually led them, along with a few others, to help found the Heritage Museum in downtown Lancaster.

Richard routinely lectured on Pennsylvania German Folk Art and freely shared his knowledge with anyone who would ask. He poured over church records, went to cemeteries and read constantly, to increase his knowledge of Pennsylvania craftsmen, when and where they worked and lived, what motifs and materials were common for each.

The couple also found time to pursue their other many interests, from painting to gardening to cooking. Joane designed and maintained a spectacular raised-bed German kitchen garden that was featured in gardening magazines and on garden tours.

In 1970, Richard released a limited edition book entitled Pennsylvania Butter Prints, which has become a great reference on the subject. He worked with Richard and Rosemarie Machmer on another excellent source book, Just For Nice, which documented a Pa. German Folk Art woodcarving exhibition.

After years of living in Lancaster, while on a drive in the country, Joane and Rich discovered and were drawn to the large stone miller’s house in the little village of Millbach.  They eventually purchased and moved into the Millbach House, which was build in 1752.  They decided not to disturb the fabric of the house by restoring it to present day standards, so they used the land across the street to build a charming country kitchen and reassembled an old log house from York County on the property in addition to other outbuildings. People driving by would routinely come up the driveway, ring the doorbell and ask, “When are the tours?”

In the summer of 2000, the Smiths donated the House of the Millbach and 13 acres to the Millbach Foundation, run by Chip Henderson, who had restored Charming Forge, 12 miles away.  This foundation is still active and operated by Chip Henderson.  Rich’s declining health led them to move back to Lancaster in order to be closer to their children. Richard died in 2001 and Joane passed away this year.

They were wonderful parents, grandparents, friends, collectors, artists, patrons of the arts and students of Pennsylvania German folk art.  They left behind a legacy of artistic endeavors, all carefully conceived and executed.  Both will be missed for their enthusiasm and dedication.

Dad always said, “We don’t really own these things. We’re just caretakers for a brief moment in time and are lucky enough to enjoy them for that moment.”

We hope you enjoy your time with them, too. 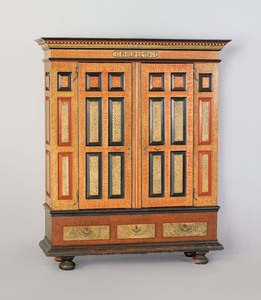 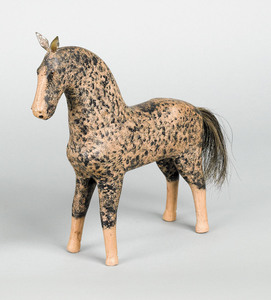 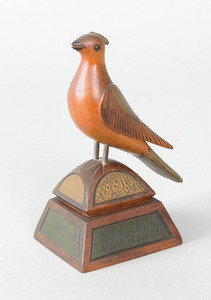 Deco-Tex carved and painted maple song bird on a p