Malvina Hoffman (New York, 1885-1966) was taught by Auguste Rodin from 1910 until 1917, learning to sculpt in a realistic style. Moving back to New York after Rodin’s death, she rented a mews apartment in a little cul-de-sac called Sniffen Court (along with a small colony of artists: sculptors Harriet Frishmuth and Edward McCartan, Cole Porter, and an amateur comedy club). She began to work with members of the Ballets Russes, mainly Anna Pavlova and Vaslav Nijinsky.

The stance of this young Dionysus is graceful and strong. The sinuous form of his pose is an s-curve. It involves the whole length of his body. In spite of the movement, the sculpture is balanced on its center of gravity like a dancer. It is a balletic pose. Pointing to the possibility of the boy being a young Dionysus are the grapes, the merriment, a pair of tiny curving horns, and the presence of his sacred animal, the panther.

Only a few large Boy and Panther Cub bronze fountains were produced by the Roman Bronze Works foundry, most were smaller apartment-sized castings.

Hoffman is most famous as the sculptor commissioned by Chicago’s Field Museum in the 1930’s to create an exhibit of 104 bronzes of peoples from around the world. 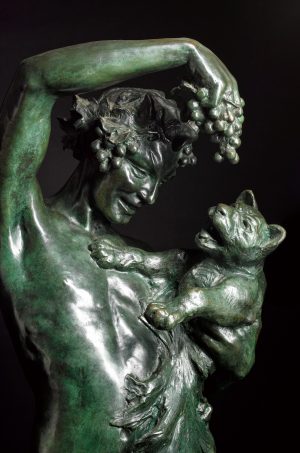