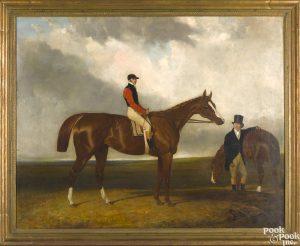 Our pick this week is Lot 360, an oil on canvas portrait of the race horse Elis to celebrate the 181st anniversary of his win at the classic St Leger Stakes in September 1836. Elis belonged to Lord George Bentinck, and is pictured here with his jockey, John Barham Day, and his trainer, John Doe. The St Leger Stakes were instituted in 1776 and still continue today, interrupted only once in 1939 with the outbreak of World War II. This portrait is dated 1838, after he retired from his two-year racing career, which boasted eleven wins out fifteen, finishing second in all four defeats. The canvas is monogrammed on the lower right by painter Abraham Cooper, a groom turned self-taught artist who later studied with animal painter Benjamin Marshall. This wonderful memoriam is estimated between 5,000 and 10,000 dollars and will be offered in our October Americana and International sale on October 7th at 9am EDT.

A Riot of Color

You too can have a horse in this race!