This week I wanted to choose one of the amazing steam toy accessories set to cross the auction block on Saturday, December 8th, 2018. I am trying to picture in my mind the grandiose layout with several large steam power plants intertwined with belts and pulleys, smoke belching from the chimney stacks and the room engulfed in motion. Everywhere you look something is spinning, churning, twirling all under a hypnotic buzz. Just keep the fires burning and the steam would drive them to run all day and night. I think every activity is represented, the farriers, blacksmiths, coal miners, knitters and even the gamblers have a member showing off their skills. The amusement park rides were just like the real ones, the Ferris wheel taking people to new heights, the swings causing hair to flow in the breeze, the horses on the carousels spinning around and around. Look over there at the whip as the riders scream from being tossed from side to side. That one kid doesn’t look so good. I think he is going to be sick. In the distance a man is playing a banjo on the entertainment stage, his foot tapping to the rhythm of the beat which changes my focus. This week I picked lot number 416 from the Steam Toy Collection of Morton Hirschberg. The painted tin Olympic relay race made by Doll exemplifies perfection in a steam toy of the early 20th century. The movement of five runners each holding a baton, which they stretch forward to the track star in front of them. The lead runner not taking off until the guy behind nears. The center with a flag pole hoisting the Olympic flag as a banner signifies the stadium in the background. Don’t have a steam toy power plant to drive the race? No problem, just turn the hand crank on the side and watch them run like the wind. This is yet another visionary toy with great action that sure beats any PlayStation game in my book. 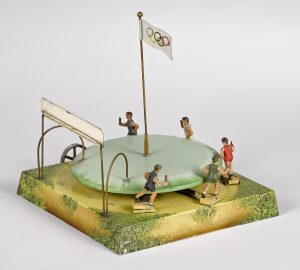