I once again am lacking promptness on my picks of the week. As the basement at Pook and Pook Auctions was being swamped in guns, toys, and antiques I found it nearly impossible to find time to address some of my favorite things set to cross the auction block. Now that I am almost recovered from too much turkey and stuffing, I have found something I need to show everyone. I must admit that if I had a pick of the past year this would certainly be in the running for my favorite! Keep in mind that this toy will be sold Friday evening, December 7th, 2018 so there is plenty of time to have it wrapped and under my Christmas tree. I wonder if 100 years ago some young child ran down the steps to find this as his gift. The excitement and awe transcend the century since it was made. This pick is lot 188, the HMS Franklin automaton. Franklin’s lost expedition was a British voyage led by Sir John Franklin in 1845 aboard two ships, the HMS Erebus and the HMS Terror. The ships became ice locked in the Canadian Arctic waters and all lives were tragically lost. In 2014 the HMS Erebus wreckage was finally located and two years later the HMS Terror was found as well. Imagine being a young sailor and getting assigned to serve on a ship named the “Terror”! This toy features a clockwork mechanism with a fantastic animation of a sailor scurrying up wire rigging as a polar bear emerges from below to chase at his heels. The sailor reaches the top where he disappears into the façade of a towering iceberg. The bear hot on his heel’s dives into the cavern with reckless abandon. There is brief delay as you wonder the fate of the young man. Did he escape, did he manage to kill the bear, what happened? Just as all hope fades, he reemerges from a trap door in the ice below only to hastily make his getaway once again. Off to the side of the bow of the ship is an older sailor wielding an axe as he swings aimlessly at a second menacing polar bear. The toy still works smoothly and the bear will chase the poor middy all day long. I am amazed by the complexity and vision of the maker so very long ago. Don’t forget that I have been very good this year and I have a spot saved under my tree! 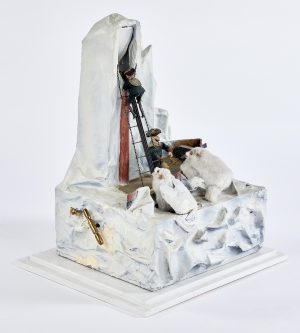