The Moods of Time

Paul Howard Manship (American, 1885 – 1966) created four bronze fountains The Moods of Time: Morning, Day, Evening, and Night for the 1939 New York World’s Fair. The sculptures were hour markers on a large sundial, allegorical figures representing the time of day. They were located in a reflecting pool in front of companion work Time & Fates of Man, in the Fair’s futuristic exhibition The Worlds of Tomorrow. The scale was monumental, the sundial pointer stood eighty feet. An enormous perisphere loomed in the background.

At the time, Paul Manship was the most celebrated sculptor in America. As a student at the American Academy in Rome from 1909 until 1912, he became interested in archaic art and in portraying classical subjects. His simplification of line and detail was welcomed as a movement away from the artistic burdens of Beaux-Arts classical realism. His classically-based figural sculpture appealed to both modernists and conservatives, and became the aesthetic standard for public art, a precursor to Art Deco. His famous statue Prometheus Bringing Fire From Heaven soars above the skating rink in Rockefeller Center.

For Manship, the Moods of Time “particularize man’s earthly concept of time in relationship to the movement of the sun.” The figures soar and speed across the sky as time passes. Morning stretches and yawns as a rooster heralds the dawn and small figure pull back his covers. He briefly struggles against awakening. Day heroically races across the vault of the sky, arms outstretched and carrying the precious sun, the horses of Apollo coursing at his feet. Everything is about soaring motion. Evening is tumbled into sleep and dreams, gently lulled to sleep by feathery-winged owls. Night is the most free, in her dreams she soars through the heavens with flying figures and a selenite moon.

The World’s Fair sculptures were cast in plaster staff, and destroyed later, but Manship cast smaller bronze versions, and kept a sundial exhibit in his own garden. In this way, he made solid and permanent a vanished moment that itself illustrated the idea of constant flux.

After Paul Manship passed away, his son John found in the pocket of his dressing gown a scrap of paper on which was written his key of life:

The primary impulse in the Arts is to give permanence to the fleeting moment, to bid it stay, because we cannot bear to lose it.

The Moods of Time were recast in a limited edition of 12 by the Bedi-Makky Foundry, circa 1992. Pook & Pook is delighted to include The Moods of Time: Morning, Day, Evening, and Night, numbered 5/12, in our September 30th/ October 1st Americana and International sale.

Also featured is an enormously engaging 50-inch long bronze tortoise by the same artist. The tortoise was modeled in 1916, but was not cast in Manship’s lifetime. According to Eric Baumgartner of Hirschl & Adler, the artist’s son, John Manship, discovered the plaster model at the Roman Bronze Works some years later. In 1998-1999 a limited edition of twelve was issued, of which our Tortoise is numbered 5/12. Paul Howard’s most famous tortoises adorn the Rainey Gates at the Bronx Zoo. 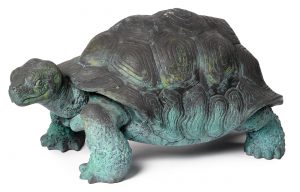 Rather, Susan, “Archaism, Modernism, and the Art of Paul Manship,” University of Texas Press, 1993.