Did your mother read you stories when you were young? Mine did, every single night on our big soft squishy couch. My brother and I would curl up on each side of her with rapt attention because no matter what she was reading, Mom would embellish the story with amazing sounds and expressions. My mother passed away at 92 in 2016, peacefully, but also taking her treasure trove of stories with her. The following spring, a pastel portrait was consigned to Pook and Pook and it captivated me the instant I saw it – a mother reading to her young son and daughter. I asked a friend to bid on it and was delighted to find the portrait in my possession – it captured the essence of my childhood. Shortly after the auction, Pook and Pook received an email asking them to contact the buyer to see if it could be purchased. The sender said that she was the little girl in the portrait. Oh, did that tug at my heartstrings – the portrait hung in my bedroom, a comforting reminder of my wonderful mother – no, I couldn’t let it go. Yet.

Last November, three years after my mother’s passing, I was staring intently at the portrait and something told me that it belonged to the little girl sitting curled in her mother’s arms. My emotional attachment to it seemed to fade and I realized that I could now let it go – I’ll always have my memories.  I no longer had the email so I thought maybe the artist could identify the subject. No, the artist had passed away. I checked with an IT guru to see if 3 year old emails could be retrieved – YES! I tried the email address only to have it come back undeliverable but at least I had a name. I tried many avenues but finally through LinkedIn I found the young woman. She worked at a southern Florida university. I called, but she was unavailable and was asked if someone else could help me. I explained that I had a portrait of her as a child, they said “Just a moment please” and seconds later she was on the phone. She was very surprised and happy and said she would love to have it. She contacted her brother and said they wanted to give it to their mother for Christmas as a surprise. What a lovely idea! I had it shipped to Florida in time for the holidays and I was happy at heart to have my treasure in its true home. For me, the portrait’s history had come full circle. The family, however, sent me a beautiful New Years surprise – a picture of mother, son and daughter with the portrait and a picture of them recreating the scene. Now, with each auction, I await for another treasure to capture my heart. 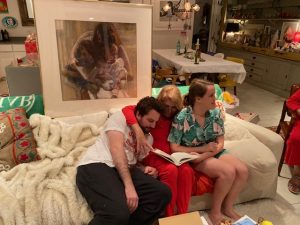