A Sense of Proportion

Lot 87 in our January 28th sale is by Samuel Colman (1832-1920), a painter of the second generation Hudson River School. A student of Asher Brown Durand and member of the National Academy of Design, Colman sought to paint the physical and spiritual beauty of the landscape, at a time when the country was torn apart by the Civil War. In 1870, after completion of the Transcontinental railroad, he headed west to paint the frontier. Colman traveled extensively, taking many trips to Europe and North Africa. At the height of his career, Colman was one of the most prominent artists in America. His paintings show Barbizon and Hudson River School influences, and in later years, his treatment of light and atmosphere verged on Luminism. His style evolved over his career from the detailed idealism of the Hudson River School to a later, looser style of painting the effects of light. He was a polymath and acknowledged master of many mediums including oils, watercolor, drawing, and etching.

In the late 19th century, the popularity of the Hudson River School was on the decline. Demand surged for imports of French Barbizon paintings. Traditional Hudson River painters struggled to sell their art. Colman, in partnership with his friend and traveling companion Louis Comfort Tiffany, launched a career in interior design. Interiors created by Tiffany and Colman include the homes of Mark Twain, President Arthur, Cornelius Vanderbilt, and, in 1988, of Henry and Louisine Havemeyer on the corner of East 66th Street and Fifth Avenue. Louisine Havemeyer and Colman were also old friends, sharing an interest in Chinese porcelain and art. In the famous Havemeyer interiors, Tiffany and Colman drew upon exotic motifs from their travels in Egypt and Morocco, and from Asian art.

In his last decade, Colman reinvented himself again, publishing two treatises on geometry in art, Nature’s Harmonic Unity, and Proportional Form. The harmonics of geometrical proportion in nature are expressed in the interrelations of geometric figures, and in numeric ratios. Studying his examples, you can begin to see how Colman recreates the harmonic ratios of Nature with proportional form in art. It is problematic to retroactively superimpose diagrams on artworks. Canvas dimensions are rarely exactly that of the Golden Rectangle. For Colman’s own painting, I experimented with two examples drawn directly from Nature’s Harmonic Unity. The first is using a simplified version of his diagram of a 54˚ rectangle and the harmonic relation of its triangles and angles. The landscape and structures are in perfect harmony. The second example uses forms of the sphere, pentagon, and “Egyptian triangle”. Beauty is achieved through perfect spacing and balance. This complex diagram is drawn directly from Nature, from the humble milkweed blossom, and also from the discoveries of Euclid and Pythagoras. The triangle proportions of 3, 4, and 5 produce phi, the Golden Ratio. The triangles fit neatly into the pentagons, all defined by the sphere. A smaller, perfectly proportional pentagon is created at the center, and can be used to create infinite smaller pentagons with equal proportions. It is amazing how the figures in the landscape also fit neatly into the angles. If you imagine the painting in three dimensions, as a dodecahedron, the light is strongest on the upward-sloping facets, and shines strongly, but less directly, on the downward-inclined lower left facet. Colman’s book further explores how forms can be used to express force. In the upper left, hanging between the windmill sails, there is a catenary curve. This rope, or remnant of under drawing, anchors the lofty sails with the weight of gravity. Reading this study of geometry adds a lot of information to our knowledge of how Colman structured his paintings. In the end, however, as I look at this painting, I don’t think of the beauty of its geometric forms or perfect ratios. I really can’t explain why I like it, which is how I feel about most art. I feel a sense of peace and balance, and am uplifted by its golden light. 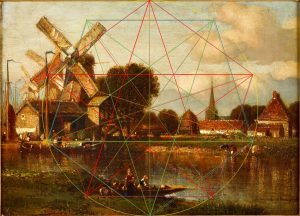 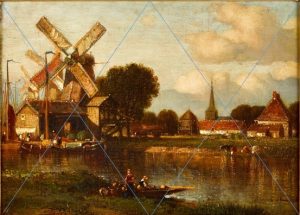