One of my favorite lots in our upcoming January 28th and 29th, 2021 Americana & International Auction is this group of sterling serving pieces by Gorham. The Versailles pattern was created in 1888 by the Gorham’s chief designer, Antoine Heller. Heller attended the atelier of Jean-Leon Gerome in the Ecole de Beaux-Arts in Paris and was influenced by Gerome’s academic style and obsession with Classical antiquity. After serving in the disastrous Franco-Prussian war, Heller left France for the U.S. to work for Tiffany. Hired by Gorham in 1881, he set about sculpting some of the most beautiful and intricate flatware patterns ever created. Heller’s artistry and craftsmanship are such that each can be celebrated as a small work of art. Although Gorham was on the forefront of mechanization, it also employed the greatest number of artists and craftsmen for hand engraving and chasing. The resulting implements feel light and balanced in the hand. Rotated in the light, their sculpted curves gleam with a soft brilliance.

In the Versailles pattern, relief sculptures of different Classical figures drawn from the palace decorate each component, infinite in grace and swimming in Classical motifs. Twenty-four iconic images from the famous art and architecture, from the walls, the ceilings, the balustrades, statues, and mirrors, are adapted to adorn the flatware. One could be an industrious, prude Victorian on the outside, while entertaining in the spirit of the most self-regarding king in history inside their own home. With 150 pieces to choose from, the opulence of an Antoine Heller service would rival the most opulent Gilded Age dining rooms. Returning from their Grand Tour, any well-heeled family scion could set up their own mini-Versailles dining table. With these serving pieces, you can start setting your own. 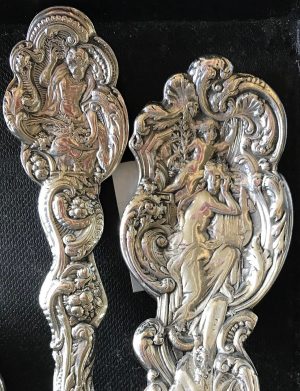