Crest of the Wave

An allegory of the element of water, Crest of the Wave is all about motion and lightness and gravity. Harriet Frishmuth (American, 1880-1980) was a Beaux Arts sculptor of the early 20th century. She studied briefly with Rodin, and then at the Academie Colarossi.

The early influence of Rodin proved strong. According to Frishmuth, he instructed students to ”first always look at the silhouette of a subject and be guided by it; second, remember that movement is the transition from one attitude to another. It is a bit of what was and a bit of what is to be.” (Arsine Schmavonian, Harriet Whitney Frishmuth, American Sculptor, Syracuse University Library Courier 9, October, 1971.)

In 1913, Frishmuth moved to New York City, living in the artist enclave Sniffen Court. She was inspired by the Fokine ballet (as opposed to her friend and neighbor Malvina Hoffman, who preferred the Ballets Russes), and found a muse in a young Yugoslavian ballerina named Desha Delteil. With the athletic and exuberant Delteil as her primary model, Frishmuth’s art began to express originality and life. Her sculptures became dynamic and full of motion. According to Frishmuth, Delteil posed for ninety percent of her more important works.

Frishmuth’s Crest of the Wave, 1928, is pure motion with a strong and clear silhouette. The motion is of falling forward, like the crest of a wave, almost at the moment of stride where both feet are unweighed. The figure’s upper body sails forward elegantly, as though with every stride she will light down on the crest of another wave.

In the 1920s, Frishmuth’s youthful, strong, and free sculptures embodied much of the liberation of the suffragette and flapper age. According to Loring Dodd Holmes in The Golden Age of American Sculpture, 1936, Frishmuth’s figures “represent the modern ideal of energy, of action, of swift movement… as representative of our times as the Venus of Melos of its (time).” 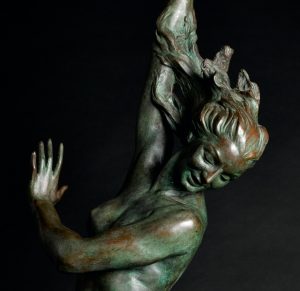