The September 15th Decorative Arts sale features a number of objects with a nautical theme. Lot 2544 is an ingenious shipboard light fixture: a scarce wrought iron gimbal-mounted ship’s fat lamp, mid 19th c., with three inner gimbaled hoops. In the 19th century, fire was the most dangerous thing to have on board a ship, but necessary to see by below decks. Until the 1850’s whale oil was the preferred fuel for shipboard lamps. When tilted, as ships are wont to do, the lamps could go out or, infinitely worse, cause a fire. Crew members were assigned to watch the lamps, in order to prevent fires. This gimbaled lamp could pivot with the roll of the ship, attached by pins to its exterior support, which was itself hung from the ceiling. This example is rare in having a three-axis structure, meaning it could rotate on three axes and keep the flame upright as the ship rolled in the waves. In his classic novel “Two Years Before the Mast,” Richard Henry Dana, Jr. described his 1834-36 voyage from Boston to California, around Cape Horn on the merchant brig Pilgrim. The sailors’ sleeping quarters were in the forecastle, where a single swinging overhead lamp was permitted. It had to be extinguished by 8:00pm. No lamp at all was permitted in the store room on account of flammable items.

The lamp would have come in handy in stormy sailing on the rough seas depicted in lot 2106, a 19th c. oil on canvas. Waves like stiff peaks of meringue surround the ship, which is looking a little worse for wear with a hole in its flag. Worryingly, a sailor appears to have just thrown a bundle over the side. There has been a sea of trouble in lot 2119, an oil on canvas of shipwreck survivors clinging to debris in a moonlit sea. The lamp would have done some tricky balancing in the ship in lot 2116, by Henry Van Wyk (Dutch, 1833-1899). The oil on wood panel is a harbor scene with a ship sailing into the wind, in which the viewer can almost feel the salty sea spray. Calmer seas are to be found in the Straits of Gibraltar, in lot 2267, a watercolor circa 1849, in which an Ottoman trading ship plies the coast.

Distant seas are represented by lot 2016, a South Pacific patriotic needlework, circa 1900, with crossed flags, center wreath, and a spread-wing eagle. This good silk embroidery is an American sailor’s souvenir of a tour in the Pacific. At the turn of the century, the U.S. established naval bases in the Philippine Islands in Subic Bay, and in the Hawaiian Islands in 1908 at Pearl Harbor, solidifying an American naval presence in the Pacific. During President Theodore Roosevelt’s 1907-1909 Cruise of the Great White Fleet  diplomatic tour and show of power , sixteen battleships cruised around the world making public relations stops. Fourteen thousand American sailors made the trip. In the port of Yokohama, Japan, trapunto embroidered banners such as these were sold as souvenirs. The sailors would often have their photos, ships, and ports of call incorporated into the design. Brought home and framed, the embroideries served as mementos of adventure on the high seas. 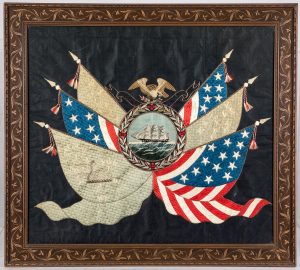