On December 21st, 1792 in the Bay of Bengal, a small party fatefully disembarked the ship Shah Ardaseer to hunt deer on Saugor Island, resulting in an event that would resonate for decades to follow. In the words of party member Captain Henry Conran:

“I heard a roar, like thunder, and saw an immense royal tiger spring on the unfortunate Munro, who was sitting down. In a moment, his head was in the beast’s mouth, and he rushed into the jungle with him, with as much ease as I could lift a kitten, tearing him through the thickest bushes and trees, everything yielding to his monstrous strength… The human mind cannot form an idea of the scene; it turned my very soul within me. The beast was about four and a half feet high and nine long. His head appeared as large as an ox’s, his eyes darting fire, and his roar, when he first seized his prey, will never be out of my recollection.” (Munro, Colin, Thus were the British defeated, London Review of Books, Vol. 40, No. 1, 4 Jan. 2018)

Hector Sutherland Munro wasn’t just any young Scotsman, he was the son of General Sir Hector Munro, Commander-in-Chief of India. Gen. Munro was a rising star and key player in the East India Company’s effort to subjugate India. He was the bitter enemy of Tipu Sultan, ruler of the Kingdom of Mysore. As a field commander, Gen. Munro led the battle in which Tipu’s father, Sultan Hydar Ali, was killed. For all of his brief lifetime and reign, Tipu was locked in a life-or-death struggle against the British. Two of Tipu’s sons were taken as diplomatic hostages to coerce his cooperation. Adopting the emblem of the tiger to represent his strength and ferocity, Tipu Sultan fought back, winning victories, and became known as the Tiger of Mysore. When word arrived of Munro’s death, it is believed to have inspired court artisans to create an extraordinary life-size automaton of a tiger mauling a British soldier. The internal mechanisms included both movement and sounds of the struggle, with anguished cries and roaring to delight the Sultan.

By mid-1793, news of Munro’s savaging reached the London papers. The tale spread quickly, and was published many times over. The burgeoning mass media had found perfect material to feed the Georgian public’s fascination for exotic animals and growing appetite for sensation. Stories, poems, and plays were written, images were printed, and cautionary tales for children were fulfilled. What enshrined the story in cultural immortality, and launched a thousand images, was the 1799 discovery of the tiger automaton during the sack of Tipu Sultan’s summer palace. Transported to London in 1800, Tipu’s Tiger was exhibited in the East India Company Museum, where it enthralled viewers for decades with its gruesome charm. Today, it is the top attraction of the V&A Museum. Fascination with tiger maulings and Munro’s death continued throughout the 19th century as tales from the British Empire circled the globe. “Death of Munro” merchandise continued to be prevalent, including, around 1810, the production of pearlware figures by Staffordshire potteries.

Far, far away, and at the close of the century, in Pennsylvania’s quiet agrarian Cumberland Valley, an unlikely candidate set his hand to framing the tiger’s fearful symmetry. Wilhelm Schimmel (1817 – 1890) was one of the more colorful residents in the region of mainly Scotch-Irish and German farms surrounding the town of Carlisle. A German immigrant, he washed up on the shores of the Conondiguet Creek sometime after the Civil War. With limited English, he depended upon sympathetic farmers for survival. These families provided Schimmel food and shelter in exchange for his labor and woodcarvings. Schimmel tramped up and down the valley, moving from farm to farm, sleeping under bridges and looking for work. He was an alcoholic, and had an established pattern of patronizing the saloons, terrorizing the town, and drying out in the lockup. Many of his alcoholic escapades were reported in the newspaper. Perpetually hung over, he had a reputation for being surly—and was characterized as such even in his obituary. Dwelling on the fringes of civilization, Schimmel’s only trusted companions were the farm families, especially their children, whom he entertained with his art. Directly carving a found piece of soft pine wood with a pocket knife, his particular gift was to magnify the personality of his subject, usually a local animal. It is probable that at some point, in the parlor of some farm, Schimmel was shown a Staffordshire Death of Munro figure and learned the ghastly tale. Perhaps he was commissioned by a patron to carve the tiger, or beseeched by a child enthralled by the gory scene; at any rate, Schimmel created his own.

The Death of Munro is atypical of Schimmel’s oeuvre, the only one of its kind. Schimmel carved other lions and tigers, but this narrative piece is unique for its finished quality and detail. Carved from a single piece of pine, with an added tail and free-moving figure, the tiger is a Schimmel masterwork. In spite of whatever quantities of spirits he used to ease his existence, his carving technique is clear and lucid. The tiger’s black-clawed feet seem to grow out of the slight curve of the base. The legs are sculpted for power. Schimmel’s intuitive cuts form planes and facets of a sinewy strength. Every subtractive cut of his pocket knife contributes to the art, none takes away. The tiger is powerful and athletic, ready to spring off its base and bound away. With a noble mien it crunches the flailing figure, the great nose wrinkling in disgust at the human taste. Dwarfing the figure in its jaws, each tooth is the size of a man’s hand. Carefully gessoed and painted, the fangs are lined with blood. The tail has been expertly restored, its twitchy form conveying the bristling energy of a Schimmel beast. Clearly here, the tiger is king, a result that would gratify Tipu Sultan himself.

The Death of Munro is Wilhelm Schimmel at the top of his form. There exists only one. Many collectors of American Folk Art will be interested in catching this tiger by the tail. 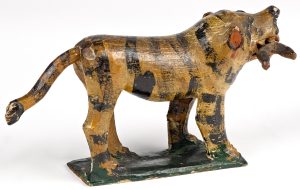 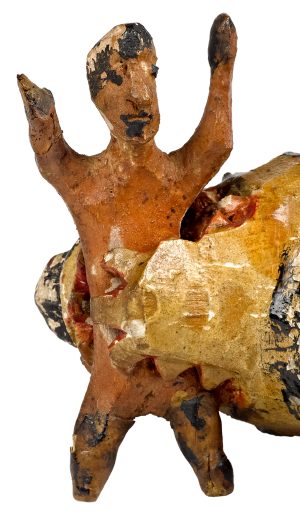