And yet, a mere 130 years later, his forgotten portrait turned up in a Pennsylvania auction house, his identity a mystery. A print version of the portrait was found floating namelessly in the vastness of the internet, having adorned the cover of Le Soleil du Dimanche. The rower wore the hat of the Rowing-Club de Paris. The paper was published in 1893. Those were the only clues to the subject’s identity. The anonymous rower print was reproduced in a history of eyewear and appraised as something of a dreamboat, the author positing that Lepron’s image contained both “butch and aristocratic associations.”

“… the 1893 illustration provides a portrait of such an idealized sportsman’s use of the monocle. His eyeglass and unflinching gaze complete the studly look begun by his knotty muscles and competitively clenched jaw.” (Jessica Glasscock, Making a Spectacle: A Fashionable History of Glasses, Hachette Group, 2021)

Identifying the artist, Manuel Luque de Soria, shed additional light on the subject. Luque (Spanish 1854-1918) was an Andalucian painter who studied and worked first in Madrid, and then, beginning in 1874, in Paris. In 1887 he participated in the Impressionist exhibit at the Salon du Champs de Mars and the Salon des Refuses. Luque also became one of the most prominent caricaturists of his day, first working for La Caricature, then Monde Parisien, Le Figaro and Le Rire. Manuel Luque was an artist of note; he knew many of the important personages in 1890’s Paris, and drew or painted them. Luque’s ability to capture the essence of his subject is demonstrated by the fashion historian, who sensed the rower’s keen competitiveness.

The decade of the 1890’s was a pivotal time in rowing, and France the locus of momentous events. In 1892 the Fédération Internationale des Sociétés D’Aviron was organized and held the first European Championship regatta. Baron Pierre de Coubertin, founder of the modern Olympics, was laying the groundwork for the first 1896 Games. With his magnificent moustache, Coubertin himself was a candidate for the portrait. A rower himself, he believed “rowing is the most perfect sport in existence.” The portrait of Émile Lepron was finally rescued from anonymity after an appeal to the World Rowing Federation. In the true spirit of teamwork, researchers at World Rowing identified Lepron, based on no other information than the year and his Rowing-Club hat. Old photographs provided confirmation. The champion’s identity was restored. Sense could now be made of the portrait’s details; the tension in the subject’s body, the challenge in his steely gaze, as well as the evident respect of the other rowers. This portrait is not of just any rower, it is of a champion at the top of his game. And it is of a moment in time, after which modern sports never looked back.

Please visit Pook & Pook to pay homage to Lepron and Luque, and view the other interesting lots in the upcoming February 9th and 10th Online Only Decorative Arts Auction. For more information go to www.pookandpook.com. 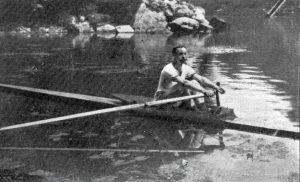