On October 28th, Pook & Pook is excited to offer at auction two brooches created by one of the greatest artistic pioneers of the 20th century, Georges Braque (French, 1882–1963).

Perhaps most famous for revolutionizing painting by founding, together with his friend Picasso, the Cubist movement, Braque spent his life in search of beauty, turning his hand to painting, collage, printmaking, sculpting, and, in his last two years, creating jewelry. In 1961 and 1962 Braque created a series of gouaches, Metamorphosis, from which he and his collaborator, jeweler Baron Heger de Löwenfeld, chose 113 images to create jewelry of a sculptural quality. The 1963 exhibition, One Hundred Jewels by Georges Braque was a huge success. The French state purchased eleven of the pieces. Braque passed away only five months later. French Minister of Culture André Malraux called the exhibition “the ultimate metamorphosis of Georges Braque.” In many ways, the works are the distillation of a lifetime of study and contemplation, spiritual symbols prompting emotions that transcend time and space.

In the 1930’s Braque’s knowledge of Greek mythology and art inspired him to create for Ambroise Vollard an artist’s book based on Hesiod’s Theogony. Viewing the engravings it is possible to notice already the form of Lot 1401, the Hades IV brooch. In one plate, the head is that of no other than Hesiod, who is pictured with Moses. The Theogony is one of the oldest works of Greek literature, written in the 8th century BCE. It is the story of the creation, the metamorphosis, of the world out of the struggle between the Greek gods, led by Zeus, and the forces of primordial chaos. It describes the origin of the cosmos. For his illustrations, Braque incorporated very early (8th-9th c. BCE) geometric style linear influences from Greek vase painting. The freedom and continuity of his curving lines connected and merged the subjects in a surrealist fashion. Hades, with brothers Zeus and Poseidon, defeated the Titans and was given one third of the cosmos to govern. His role was to keep inhabitants in the Underworld, maintaining balance in the cosmos. Was the Hades image a symbol of human and earthly metamorphosis; our emergence from an ocean of energy, and our inevitable return to it at death? In his notebooks, Braque wrote, “In art there is only one thing that matters: what cannot be explained.” 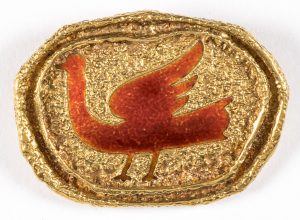 The image of Lot 1400, the Procis brooch, can first be seen in Braque’s 1950 etching Oiseau III. Procis is named after tragic Greek mythological princess Procris. Procris was married to Cephalos, who was kidnapped by the goddess of the dawn, Eos. When Cephalos demanded to be returned to Procris, angry Eos planted the seed of doubt about the fidelity of Procris during his long absence. Cephalos disguised himself to test his wife’s fidelity by tempting her as a stranger. Procris refused temptation, but finally, yielded when he offered her jewels. Cephalos then angrily revealed himself. Procris flew away to live as a follower of Artemis. She should have stayed away, for that was the last of her freedom. She reunited with Cephalos, after which he accidentally speared her with a javelin. Braque’s Procis brooch has an archaic appearance with a freehand oval border and textured gold background. The bird itself is of carnelian enamel, evoking carnelian jewelry of the Bronze Age Mediterranean.

Georges Braque had a lifelong fascination with birds. He said, “The bird is the summing up of all my art – it is more than painting.” He enjoyed trips to the Camargue salt marshes, a region of water, sky, and birds. Across history and cultures, birds are spiritual symbols that soar above earthly limitations, flying freely to the heavens and back. From Plato, “the soul… when perfect and fully winged, soars upward.” The bird is a symbol of immortality, the spirit crossing time and space through life and eternity. It also symbolizes death, and apotheosis. So Braque has returned to his subject of metamorphosis.

“I will try to explain what I mean by metamorphosis. For me no object can be tied down to any sort of reality… confusion is fundamental to the poetry.”