Over two hundred years ago, in Lancaster County, Pennsylvania, an artisan known as The Compass Artist produced colorful, intricately decorated furniture and objects in a distinctive style. Research has revealed the pieces were owned by German Protestants of a variety of faiths, in an area on the present-day border of Lancaster and Lebanon counties encompassing the Cocalico Valley. While it is unknown if the Compass Artist was an individual or a group, the body of work produced is very cohesive. Two excellent examples will be featured at Pook & Pook on June 24th, in the Estate of Joyce Bowes Collis. Lot 123 is a poplar dome lid box, decorated with red and white pinwheel flowers on a blue-green ground, and lot 382 is a doll cradle with floral decoration on a salmon ground. The Compass Artist laid out designs using a carpenter’s scribe compass, inscribing patterns into the wood to be later painted. These geometric indentations can be seen and felt on the surfaces of both dome lid box and doll cradle. The perfect alignment of pattern on the box from lid to front was obtained by inscribing the top before bending and attaching to a completed, inscribed and dovetailed base, then sawing the whole thing in half. Finally, the paint would be applied following the outlines, and painted in freehand between the designs. No two patterns by the Compass Artist are identical.

Early collectors of Pennsylvania folk art and painted furniture included Henry Francis du Pont (1880-1969), whose collection forms the basis for the Winterthur Museum, the premier museum of American decorative arts. Winterthur Curators Wendy A. Cooper and Lisa M. Minardi have contributed much to the sum total of what is known about the Compass Artist, and have published their research in “Paint, Pattern & People; Furniture of Southeastern Pennsylvania 1725-1850,” Winterthur Museum, 2011.

According to Cooper and Minardi, at least sixty objects made by the Compass Artist have been documented, thirty-five of which are dome lid boxes. Collectors pursue these items avidly, and look to Pook & Pook to bring them to market. Pook & Pook has auctioned an average of two works by the Compass Artist each year for the past fourteen years, nearly half the known total. Pook & Pook’s history of success with Compass Artist objects goes back even further: in April 2007, Pook & Pook sold an outstanding example of a dome lid compass box from the Shelley Pioneer American Collection for $374,400. This box was nearly identical to another sold from the collection of Richard and Joy Kanter at Sotheby’s in January 2002, originally from the Lorimer Collection and, of course, Ronald Pook Antiques.

This Thursday and Friday, Pook & Pook will continue to lead the market in Compass Artist works, part of the extensive American Folk Art collection of Joyce Bowes Collis. 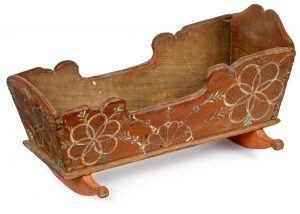