The Verdure Tapestry of Daniel Garber

The Verdure Tapestry of Daniel Garber: The Mary Maxwell House

Daniel Garber’s painting is an idyllic moment of country life, a milk wagon on a rustic lane. The view across the road from his house, in fact. Peaceful, but this tranquility belies the effort and technical mastery from which it was born. Garber worked both as a plein air and studio painter, starting a work outdoors, continuing to paint in the studio, slowly building up the detailed surface, and then returning to the outdoors at the right time of year and day, as long as conditions held. He would rework a painting until he was satisfied, even if it took months.

Pennsylvania artist and art dealer Peter Rudolph, who first brought The Mary Maxwell House to market, explains Garber’s technique, “He is known for his all over tapestry approach, flattening the picture plane by using a stitch-like painting technique, lifting the background to incorporate itself with the foreground, and using a pallet that creates an all over spatial continuity.” 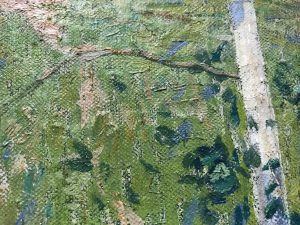 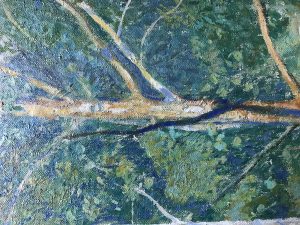 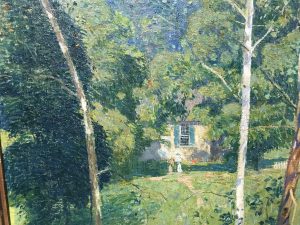 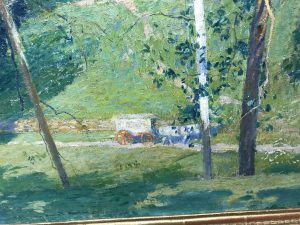 The Mary Maxwell House is indeed a verdure tapestry in blue, green and gold. Garber’s built-up layers of paint create an embroidered, sculptural effect. The viewer stands perched on the flat, somewhat blurry shelf of foreground, tipped towards the precipice dividing the scene. The slashing band of road divides it yet again, crossing the sun-splashed clearing. Bright sunlight is reflected off the flat face of the house. The eye travels upward to the distant blue trees. Fat lozenges of pale paint scud across the sky. The nearly cylindrical form of the cedar tree on the left is formed by dark strokes of hatching to describe its volume, its density indicated by the hollow of deep shade beneath. The grassy vale is, upon closer inspection, an archipelago of many greens, islands of grass and moss. The mass of trees on the right are ruffled by a breeze. Their thick buildup of leaves turn in the sunlight, growing airy near the treetops where Garber permits some of the canvas’s golden ground to show through. The foliage around the house is hatched and cross-hatched in an intricate weave. The leaves are a tapestry of stitches in paint, the short strokes describing form, life, and energy. Framing the action is a filigree screen of three trees, their trunks, branches, and vines weaving upwards and outwards like long skeins of silk embroidery floss, tying everything down and holding it together.

To look at Garber’s painting is to want to wing over the precipice and, like a swallow, swoop down through the vale, and up, over the house into the paradisiacal trees beyond. To exult in and be surrounded by the green energy, blue tranquility, and gold illumination of Garber’s world. To be near the painting is to want to touch the threads of paint and feel the thickness of the brocade, the density of the pattern, the silkiness of the ropey floss. The Mary Maxwell House is an artwork of sublime beauty. One does not have to be an art expert to be captured by it at first glance.