Why do we all love blue and white china? Perhaps because it is hard-wired into our system. Across history and continents, the love of blue and white Chinese porcelain has launched ships and industries.

For a thousand years, China had a complete monopoly on porcelain, which was traded along the Silk Route and the maritime trade routes of Asia. Around 1320, the kilns of Jingdezhen began using imported Persian cobalt, which was twice as expensive as gold, and blue and white china was born. In imitation, Middle Eastern potters developed a tin glazing technique to whiten their ceramics. The tin glazing technique spread to Europe via Majorca in Islamic Spain, and then to Faenza in Italy. Religious strife and the Eighty Years War pushed a wave of Protestant potters north to Delft and to England in the late 16th century. Their early majolica was rooted in the Italian style, polychrome, and with the expensive tin glaze used only on the front. But this style was to be influenced by China again… 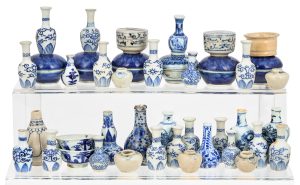 On the other side of the globe, the Dutch continued their struggle against allied Spain and Portugal by attacking routes of the spice trade. To finance this venture, in 1602 the Dutch created the VOC, the Dutch East India Company, selling equity shares of ownership and bonds to public investors to raise capital. The VOC became the first real public company and the first to harness the massive potential of capitalism. Investment, and the ability to use military force, made it the greatest commercial enterprise in the world. Its first venture, led by Admiral Jacob van Heemskerk, was also a watershed event. In 1603 “the Portuguese carrack Santa Caterina fully laden with silk, musk and porcelain was captured near the shores of Singapore, and the cargo was sold in Amsterdam—this was the first big auction of Chinese porcelain in northern Europe.” (Thorsten Giehler, The Ceramics of the Maritime Silk Route). The 1604 auction was wildly successful, setting off a China Mania, proving the European elite were willing to pay enormous sums of money for blue and white porcelain. 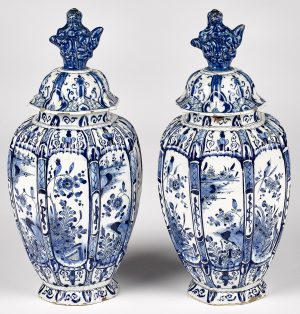 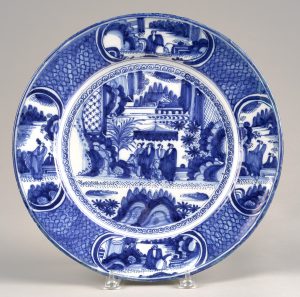 Delft majolica potteries began manufacturing affordable imitations of Chinese porcelain. A refined faience was achieved for the higher end of the market, copying both the shapes and decoration of the Chinese porcelains, with white tin glazing on both sides and designs in cobalt blue. The Delft potters also created their own interpretations, melding Chinese and European design features into a new style, chinoiserie. Delft blue became famous, eventually becoming the name for all of the blue and white objects. Made in different locales, what it had in common was the white tin glaze and cobalt blue decoration. Delft tiles and pottery became fashionable and were in demand in the homes of the gentry and merchants to show prosperity. Tiles were used around chimneys, hallways, staircases, kitchens, and as lintels, and were often painted with scenes of daily life, or biblical or mythological figures. 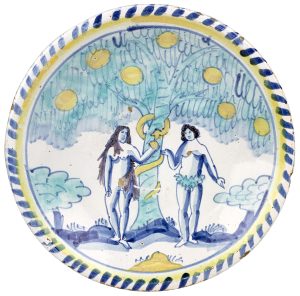 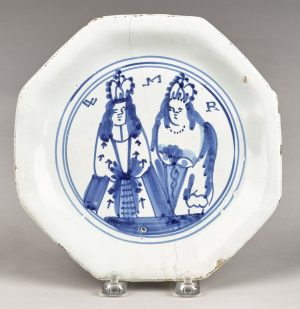 In England, Delft production grew dramatically after 1688, when, on account of his marriage to Mary II, the Dutch William of Orange was crowned King of England. William and Mary brought designer Daniel Marot with them to their English court. Marot’s ornate Dutch style was highly influential, shaping both the design of Delftware and the way objects were used in interior design. Delftware was displayed all over the house, rather than solely inside cabinets. Rows of gleaming blue and white garnitures lined mantels, stepped chimneys, and furniture. In the words of Daniel Defoe, the new fashion, “spread to lesser mortals and increased to a strange degree afterwards, piling china up on the tops of cabinets, escritoires and every chimney-piece, to the tops of the ceilings… till it became a grievance.” Delftware was not only the tableware of choice for the middle-class clientele who could not afford Chinese porcelain, but also a prominently displayed status symbol in the homes of the elite, including Queen Mary, who commissioned Delft items in fabulous baroque forms, but also collected fine Chinese porcelains. While Mary died in 1694, the reign of Delft lasted until the creation of a European porcelain industry in the mid-18th century.