We’re Nuts About This Lot!

We all have good intentions, but things just seem to get in the way. I was going to get back into fishing. I was going to take that vacation to that special spot. I was even going to take my suit coat off of the treadmill and start using it! That was so long ago, that Jack LeLanne was a young man on black and white television. Well, my good intention was to do a pick of the week, highlighting a particular lot in an upcoming sale. My pick of the week has changed to pick of the year! I promise to do better. Pook and Pook Auction here in Downingtown, Pennsylvania has been my second home for over 15 years now. I still love coming to work everyday (well most days). I still love making new discoveries. I still love learning about this profession that my life is so deeply rooted in. I was inspired to get back to my hunt and peck typing to tell you about a particular lot that is coming across the auction block on May 21st, 2021. My pick is based on welcoming back old friends. The last time I saw this guy was June 20th, 2009. I wonder where he has been, what has he been up to? He still looks as old and vibrant as ever! The red tone of his coat, still chewing on that same old acorn and the grass mound he is standing on still is kept neatly trimmed. My pick that inspired me is lot #413, the Wilhelm Schimmel carved and painted squirrel. Standing at 4” high he is just an imposing figure and epitome of folk art. At over 130 years old, he looks like he can move faster than the wind, leaping and bounding from branch to branch as he searches for his stashed food buried so very long ago. Who is going to adopt and care for my old friend this time? I sure do hope that he gets a loving home. 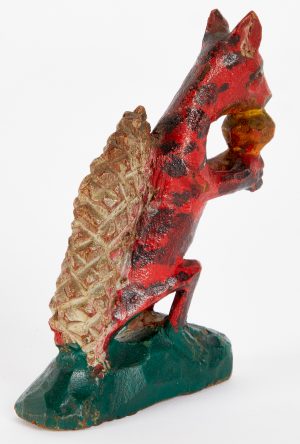 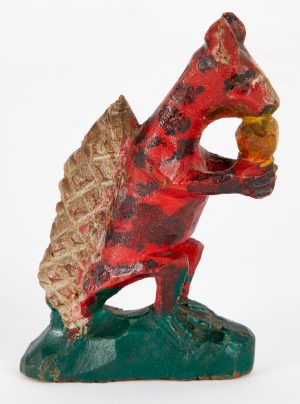 Auction Gallery Exhibitions: Behind the Scenes with Elizabeth Pook